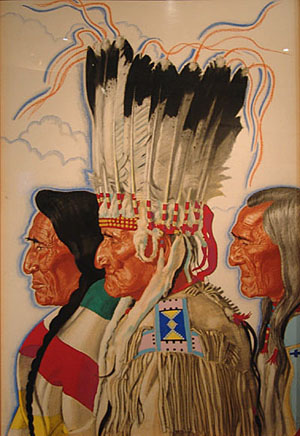 Born near Munich, Germany, Winold’s father,enrolled him at the Royal Academy of Fine Arts and the School of Applied Arts. Winold fell in love with a fellow student, Henrietta Luethy, and they married in 1912. Reiss convinced his bride that they should come to America. When they arrived in New York the following year, settling in New York City. By 1918 he had saved enough money to allow him to chase his dreams of the West in real Indian country. In the fall of 1919, he traveled alone to Browning, Montana on the Great Northern. He stayed at the Haggerty Hotel and produced 35 portraits within the month, using brilliant colors in pastel and tempera, rather than traditional oil. The Blackfeet bestowed on him the name Beaver Child. Back in New York, he exhibited his new works, and they caught the eye of Dr. Philip Cole who purchased the entire group.

Reiss’ brother Hans traveled to Glacier National Park and decided to stay and became a licensed guide in the Park. By chance, one of his clients was Louis Hill. Their association led to a contract for Winold Reiss. For ten years beginning in 1927, Winold Reiss returned to Browning every summer to paint for the Great Northern Railway. Many exhibitions followed, in America and overseas. Reiss left an incredible body of work behind him that captured the true spirit of the Blackfeet. Reiss was also commissioned by the Great Northern Railroad to promote its route into Glacier Park during its advertising heyday from 1920s to the 1950s. The Great Northern Railway reproduced Reiss’ work on calendars, postcards, menus, playing cards and more. His work illustrated the Railroad’s “See America First” campaign that promoted travel to the “Crown of the Continent.” Finished portraits were sent from Browning to the Great Northern Railway headquarters in St. Paul. For three years he also ran a summer art school with his friend Carl Link, renting a cabin from Hugh and Mary Black near St. Mary’s Lake.