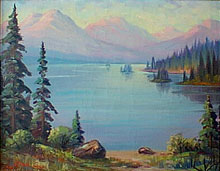 Harry Leonard Lopp was born May 1, 1888, near Highmore, South Dakota. Lopp was raised on a cattle ranch and attended nearby Canton and Elk Point schools where he showed early signs of artistic talent by drawing everything around him. Later he studied art under Prof. P.J. Rennings at Union College, Lincoln, Nebraska, and privately with Prof. John Updyke and Robert Wood. On July 1, 1918, he was married to Margaret Booth of Colorado Springs, Colorado. Together they painted and traveled over much of the U.S., Canada and Alaska. During much of the ’20’s Lopp was staff artist for the Hudson’s Bay Company of Canada and exhibited from Winnipeg to Vancouver.

Contracts with the Elks and Moose Lodges took them north to Alaska for several summers. In 1928 they established art studios and a home for his parents at Seaside and Portland, Oregon. The depression forced the closing of the galleries and a move to Great Falls, Montana in 1936. Lopp was later appointed staff artist for the Glacier National Park Company, exhibiting every summer at Many Glacier Hotel until 1941 and again in 1960. National art recognition was achieved in 1941 when Lopp was invited to New York for the one-man show at the Milch Gallery and a concurrent showing at the Metropolitan. During their two-month stay in New York, they were the guests of geologist and glacier specialist Dr. and Mrs. Jim Dyson of Yale University with whom the Lopps had spent many days hiking on the trails in Glacier Park. In 1944, Lopp designed and built his own lodge on the west shore of Flathead Lake. He handpicked every log in the chalet from standing timber. This home became a center for the arts and a favorite stopping place for their many friends and fellow artists such as Roland Gissing of Canada, Red Skelton, and Dave Rubinoff, a musician. Additional shows followed at the Pressmen’s club in Spokane in 1951, and he won the Premier Award, Fine Arts Department, of the Montana State Fair at Great Falls in 1961. Major commissions were from former President Harry S. Truman; FBI Chief J. Edgar Hoover; the Lions International President; the restoration of several C.M. Russell paintings in Great Falls; and collections for the Conrad National Bank of Kalispell and the Bank of Idaho at Boise. Failing health and age forced a move to Kalispell where he passed away in 1974. His passion for the beauty of Glacier Park and his ability to record it on canvas has secured a permanent position as one of the great artists of Montana and the West.