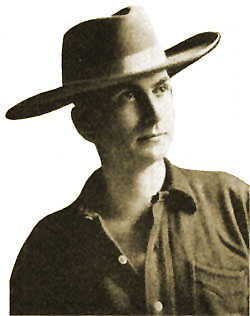 Fred H. Kiser is acknowledged as one of the most successful commercial photographers between the turn of the century and the First World War. Born in Grand Island, Nebraska, Kiser moved to Portland, Oregon where his parents ran the Columbia Beach Hotel and Nursery. Fred became interested in photography, and with his brother Oscar, established “Kiser Brothers, Photographers.” A 1903 exhibition of his Crater Lake photographs brought Kiser his first public recognition. Two years later he was honored as the official photographer of the Lewis and Clark Centennial Exhibition in Portland, Oregon.

That same year, Louis Hill became president of the Great Northern Railway and began searching for artwork to promote Glacier.

Hill discovered the Kiser exhibition and immediately appreciated Kiser’s striking photographs of mountain scenery. Kiser was hired as the official photographer of the Great Northern Railway, and for six years spent his summers in Glacier. Soon, his images were reproduced in brochures, books, periodicals, and as postcards. Some were released in beautiful hand-colored portfolios richly showing scenes from Glacier.

After Kiser’s association with the Great Northern ended, he returned to photographing Crater Lake. There, he built his studio in 1921, and became it’s official photographer.