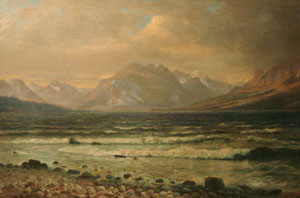 Ralph Earl DeCamp was born in Attica, New York. He grew up in Minnesota, by the Red River. He ran a threshing business, but also made a name for himself as an artist in the Midwest. Charles Fee, a high-ranking executive for the Northern Pacific Railroad, asked the painter to join this corps of artists working on the Northern Pacific’s behalf, and the young artist accepted. DeCamp found himself bound for Yellowstone National Park in early summer 1885. In Helena he began working for the United States Surveyor General’s Office until 1924.

Charles M. Russell and DeCamp became lifelong friends. Russell admired his mastery as a landscape painter, one time remarking, “that boy can sure paint the wettest water of anybody I know. You can hear his rivers ripple.” After nearly fifty years as a mainstay of Montana art, DeCamp’s life in Helena came to a halt when his wife Margaret passed away unexpectedly in November 1934. He moved to Chicago and died there two years later.